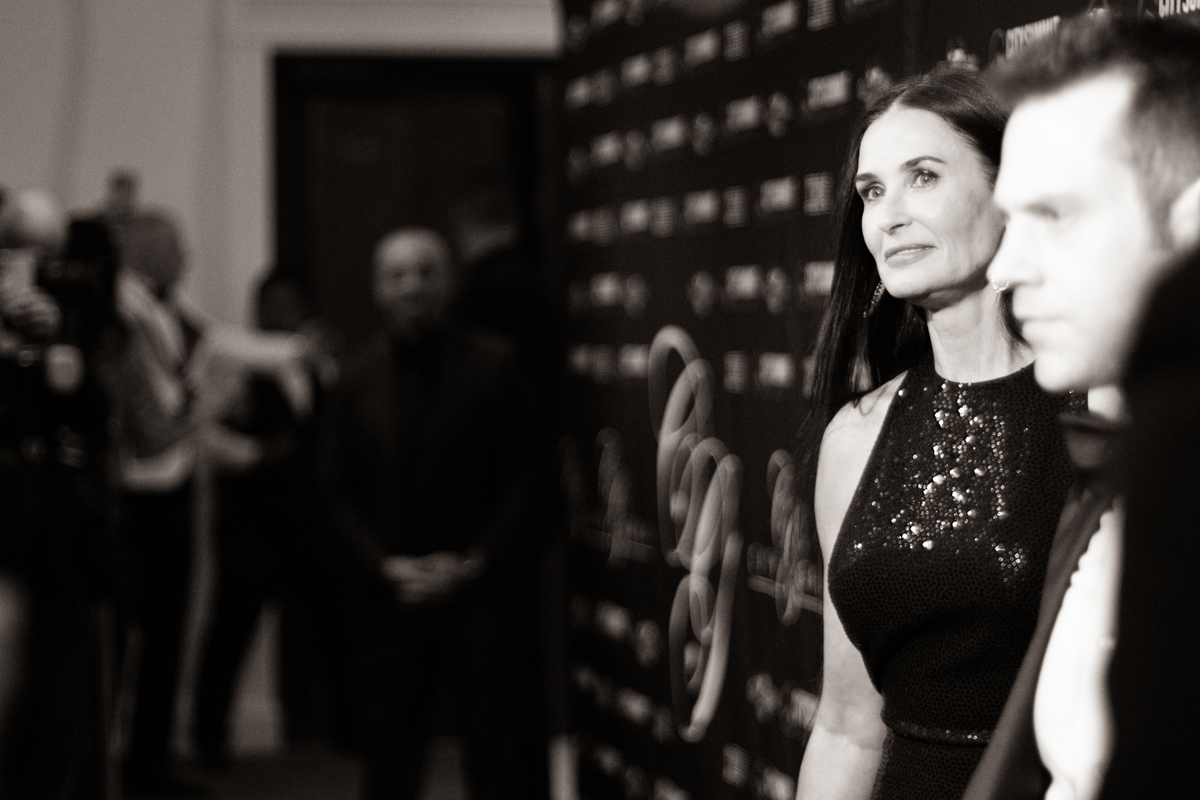 Welcome to a Storytelling Revolution

Demi Moore stole the show at the City Gala this year by unearthing how she spun trauma into gold. The complex family life she suffered as a child has built iridescence, charm and unshakeable resilience into her character. Demi’s latest passion centers around pivoting the course of a multi-million-dollar industry tucked just behind southern California’s peripheral vision.

The industry is a topic most shy away from given the dark nature of the 150 billion-dollar global epidemic. However, Demi has chosen to swim upstream and take on this economic giant to keep American children safe from becoming victims of profit.

Demi was born in Roswell, New Mexico where she moved over 40 times before she ended up in Hollywood. Her parents were severe alcoholics which caused Demi to constantly adapt to survive. Demi Moore's identity as a youngster was ruptured when her Mom sold her for a night to a man for $500. Naturally, the experience gave her devastating lifelong insecurities and ease in chaos. 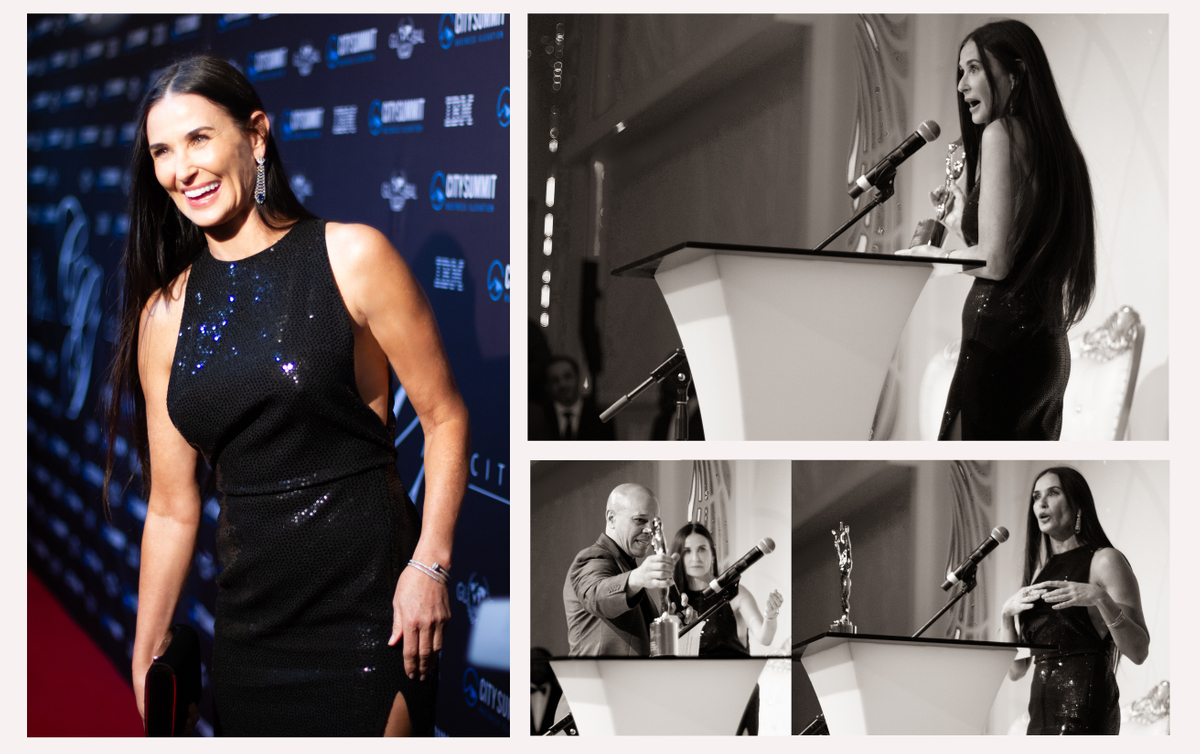 Demi was on her own since the age of 16 and as a result, didn’t finish high school. Instead, she began to cocoon inside a space of 'make-believe' and found her superpower. Demi blossomed into one of Hollywood's most influential actresses of all time. She’s broken records by earning multi-million-dollar salaries as well as shaped a healthy perspective on beauty. She was the first celebrity to appear on the cover of Vanity Fair pregnant, which rocked the media. The ‘culture buster’ created by Annie Leibovitz in 1991 ignited a flurry of photographers reimagining what beauty is.

That was not the only trail she blazed. Demi went on to partner with some of the most high profile actors in Hollywood. After marrying Bruce Willis in 1987, she left the world of Hollywood to raise her three daughters in Hailey, Idaho. Demi focused on raising her family until she left the quiet, small-town life to act in the independent drama, Passion of Mind (2000). The marriage ended at the turn of the century and Demi started her most profound chapter which propelled her back into the spotlight.

Demi met Ashton Kutcher in 2003 and the pair became inseparable. They were married in 2005 at their Beverly Hills home where they joined forces to change the world. Ashton Kutcher was a biochemical engineering student at the University of Iowa before he was discovered. He has always been passionate about philanthropy and technology. Once he met Demi, together they were able to channel matters close to their hearts into action and create a gigantic platform to create a healthier mentality towards sex.

In 2011, a dateline report caught their eye and their passion for protecting children synced. Kutcher had become very close with Moore's daughters, who sometimes called him "MOD" (My Other Dad). When he saw this shocking report, his visceral instincts as a father figure kicked in.

Footage of 6-year-olds being raped for profit shook them to their cores. They realized a rewiring of society was necessary to diminish the problem at the root and rebuild a mentality that eliminates buying girls as an option. They discovered that, in the United States alone, between 100,000 and 300,000 girls are enslaved and sold for sex, while upwards of 40 million girls and boys are prostituted worldwide.

The pair put their heads together and after incubating their ideas, the ‘Real Men Don’t Buy Girls Campaign’ was born. The campaign deconstructs and looks at deterring men from fueling the billion-dollar industry. Ashton and Demi address the male psyche with images of celebrities holding up signs stating ‘real men don’t buy girls’. Check out http://demiandashton.com/ to see which actors stand by their powerful message.

Since their divorce in 2013, Demi has found bravery in candor and revealed gruesome details in her autobiography 'Inside Out.' The book 'is a story of survival, success, and surrender.’ The book has been described as a ‘wrenchingly honest portrayal of one woman’s ordinary and iconic life.’

“My story is about adversity. It is also about tremendous resilience. In this deeply candid and reflective memoir, I pull back the curtain and open up about my career and personal life - my tumultuous relationship with my mother, both marriages, struggles balancing stardom with raising a family and despite it all, my journey toward open-heartedness.”

Demi's latest triumph was filling in for Johnny Depp at The City Gala, a world-class business acceleration experience giving entrepreneurs the ability to connect with each other and to advance their knowledge and partnerships in elite social circles.

Demi won over her crowd immediately with her air of ease and comedy. "I'm so sorry my friend Johnny Depp couldn't make it," she said with a twinkle in her eye. “We didn't think he would look as good in a dress." The crowd erupts with laughter. "Next year I'm coming as Johnny,” she said as she laughed good-naturedly at the image of herself as a pirate rockstar. 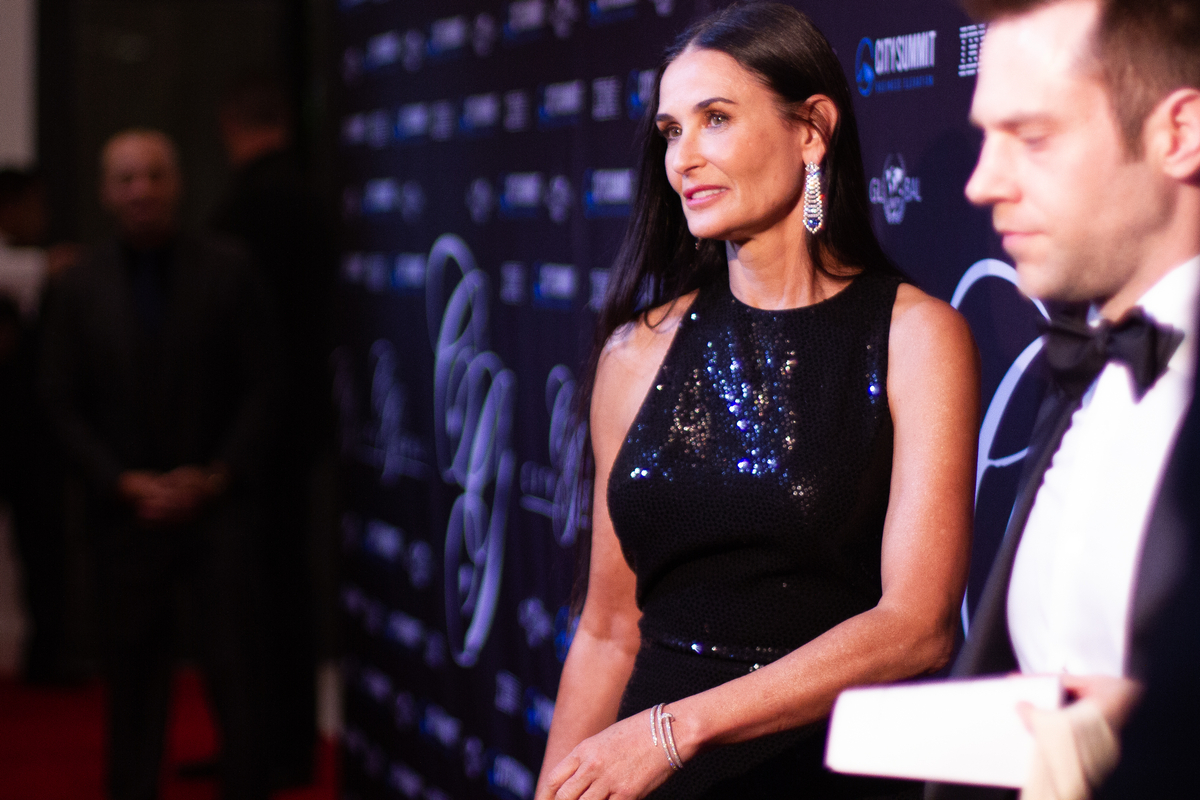 For the next 40 minutes Ryan Long, founder of City Gala, and Demi had their audience enchanted. They talked about finding superpowers in invisible places. “Not many have the strength to be that vulnerable,” Ryan said. “What inspired you to write this book?” He asked Demi during their up close and personal conversation about ‘survival, success and surrender.’ Demi paused briefly to consider the question sincerely.

“Honestly, the book came to me. I started it nine years ago but I wasn’t in the right place to see it through. I wasn’t ready to be that honest with myself. The book is framed around an essential question. How did I get here? And then when my life exploded, the question became, how the fuck did I get here!”

A wave of laughter rippled through the audience. His face softened as she dove deeper. “The book just really reflected something important for me. If I can do something by sharing from the depth of my soul, even the things that aren't pretty, maybe I can help others feel less alone. I did it in case there is one little girl out there who doesn’t feel good enough. If she felt shame for taking up space and I can help her feel she has a chance at love, the book has been worth it.” 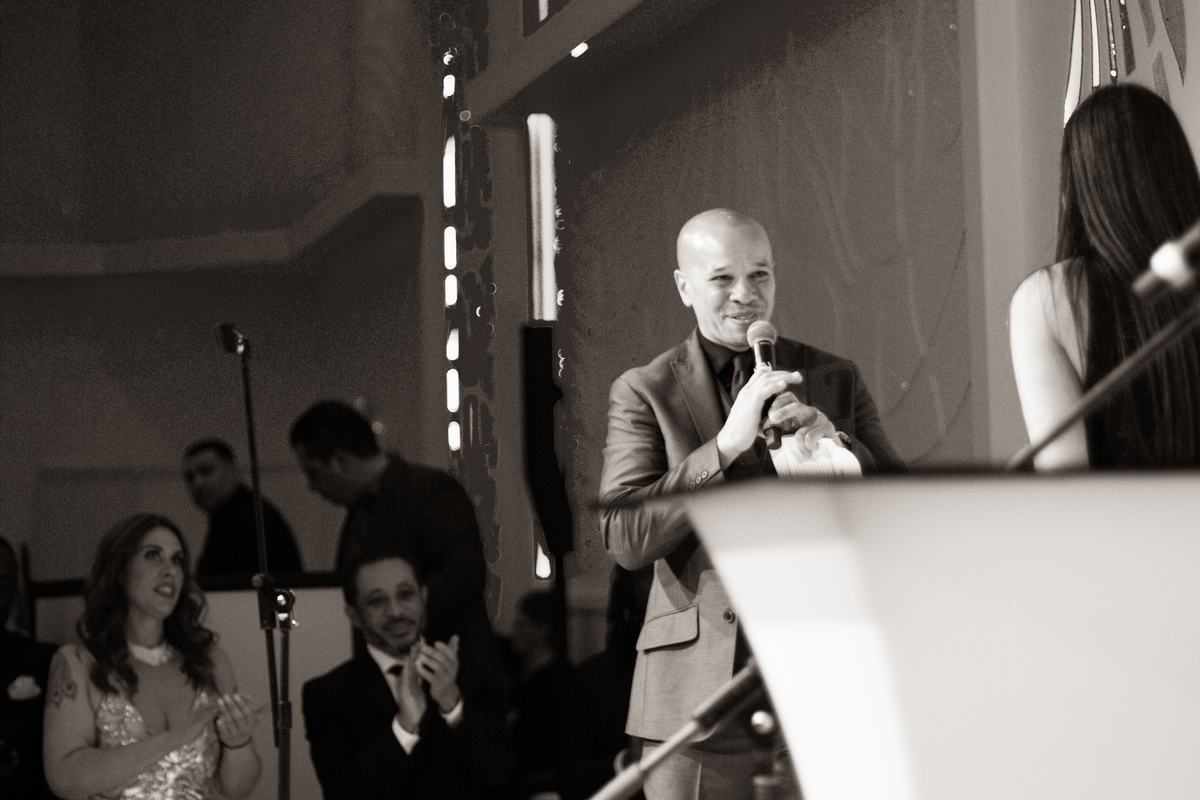 A sincere and profound thank you to all who attended the City Gala. Without knowing it at the time, this would be Ryan’s last gift to the world. He passed away only a few weeks after this interview and I am stunned such a force of nature is no longer with us. Thank you, Ryan, for all I’ve learned from attending your magnanimous events. From someone who spends most of her work week at gatherings and meetings, yours were always something on another level. He had achieved many extraordinary things and we will continue to do similar work with his spirit in our hearts. Ryan, you will be truly missed by all who knew you. Rest in peace friend, the mark you’ve made on the world will live forever. 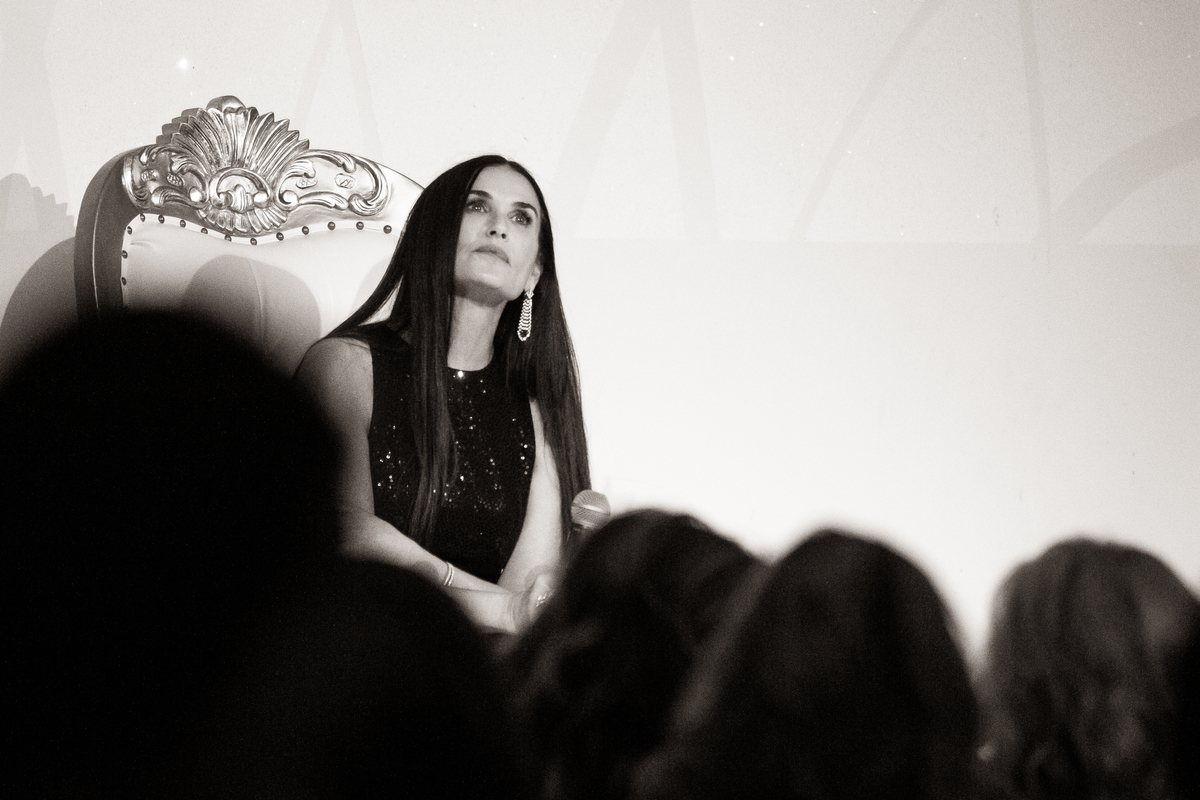