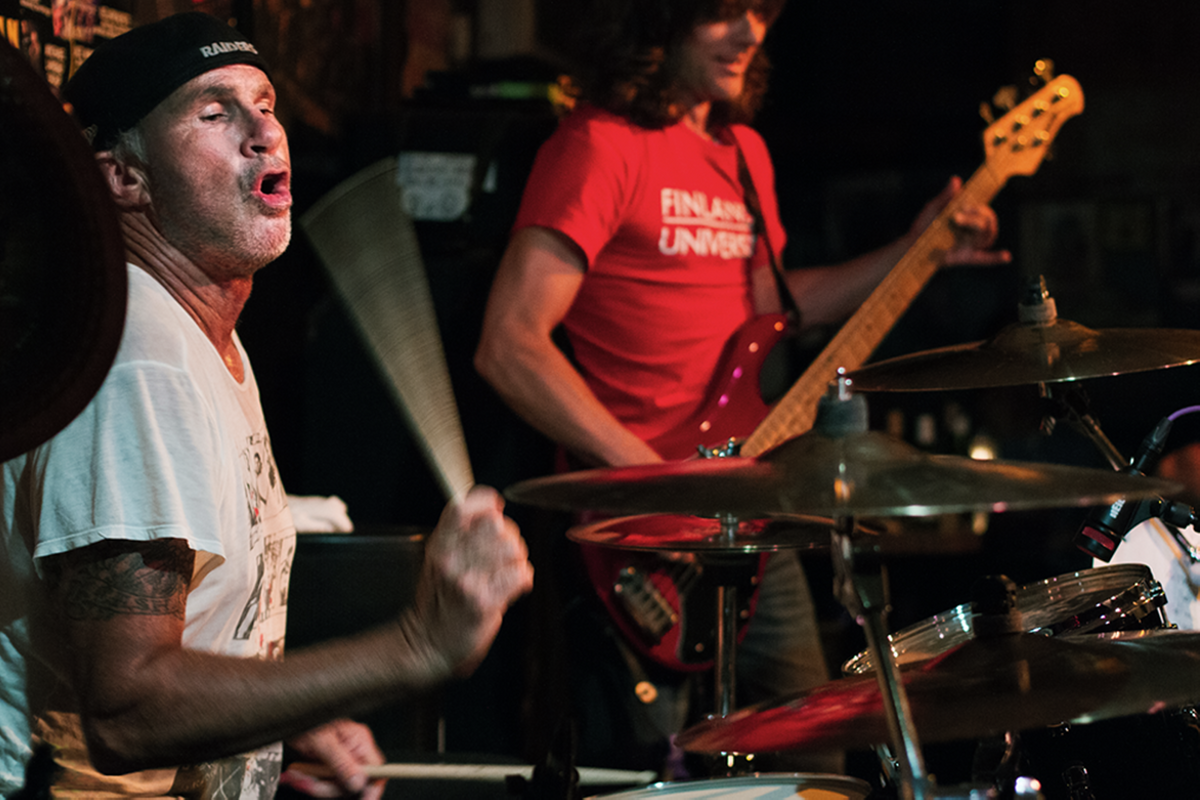 It’s easy to see why Chad Smith, Robert De Niro and Clint Eastwood hang out here. The ‘Don Corleone’ of world-renowned jazz clubs, The Baked Potato, welcomes their guests with warm ambience. An opulent history of portraits and autographed posters encapsulate a certain mystery of what has taken place previously in the club. Hints of; ‘What happens in The Potato stays in The Potato,’ wink from the grainy photographs covering the walls.

Chad Smith's Bombastic Meatbats; fluent in funk rock fusion, erupted on stage at The Baked Potato recently with a rare performance. The Meatbats began with “Passing The Ace,” bewitching the audience with sharp improvisational instincts, musical depth and cheeky banter. "Did anyone notice the new carpet? No more sticky floors," Smith jokes, impersonating a shake-weight with a drumstick. A cheshire grin appears as he launches into the first song.

“Mountain of Meat” and “Lobster Legs” lured the attention of the audience as Jeff Kollman (guitarist) climbs the scales peppering the melody with an occasional jazz lick. Ed Roth (keyboardist) accents the half time groove with lingering reverberations.

After the fourth song, Chad leaned back in his chair and accidentally switched off a light. He spun around abruptly and joked, "Hey did ‘The Spud’ pay the power bill this month?" Laughter thundered through the crowd as the band briefly chatted amongst themselves. “This is romantic,” announced Smith. “Let’s turn ALL the lights off…we shall play on!"

An exaggerated scream from the audience pierces the air. Laughter and impersonations of Psycho from the crowd were hushed with the hypnotic song "Into the Floyd.”

A perfect choice to play in pitch black. The tempo tightens and loosens as several chapters unfold. Each layer of music can be heard separately while there are no visual distractions to deviate from the sound in the dark. The music felt through the floor created a canvas for a heightened sense of sound to explore the song’s seasons. Experiencing a live performance without sight added a layer of awareness and mystery. 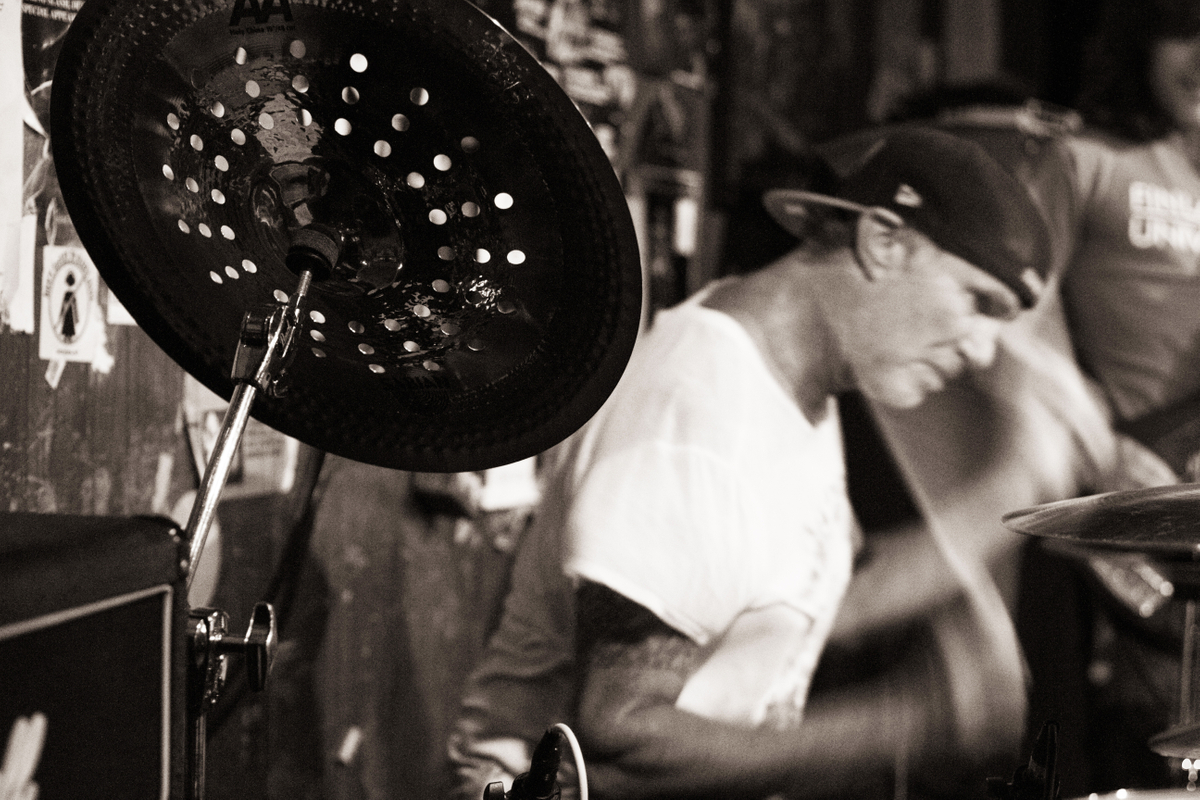 Smith talked about the feel behind his drumming to Carlos Santana in ‘Music Radar’s’ interview. “The important thing is people feel the joy and love for what you’re doing and everyone is connected on stage. I think they pick up on that.” Smith pauses to conclude. “I know they do. I love to play anywhere, anytime whether it’s 10 people or 10,000, it doesn’t matter. Making people happy through music is a gift."

“During, ‘Into The Floyd,’ you can really see what kind of a player, and often what kind of a person a musician is,” Roth elaborated. “The proof is in how they solo in those situations. Open solos, free from being stuck in a box is my favorite music to play.”

An interview I recently conducted with Kofi Baker, (Ginger Baker’s son) on the mechanics of drumming also became very relevant in this song. “Chad's distinctive voice is in the way you can hear his left foot playing the 8th note in a lot of his funk,” said Kofi. “He's also one of the few rock drummers who have some good chops. Chad also remembers to use his fourth foot. A lot of drummers use only three feet consistently. He is inspired by my Dad’s playing. If the solo inspires a non-musical person to tap their foot in response, he's communicating something complex very well."

As the lights came on and the next song started, I noticed most of the crowd immediately start tapping to the beat. Kollman and Roth sonically discuss ‘Oh! I Spilled My Beer’ and ‘Greasy Louise,’ while Chad frames the melodies with a strong back beat and creates more improv-wizardry.

The last song explored the musical architecture of “Who Are You” by “The Who.” Smith concluded the set with a volcanic solo. "I always loved the dynamics of that song,” Roth revealed. "I did an arrangement of ‘Who Are You’ for my first solo album then we later added it to The Meatbats set. It can be tricky playing instrumental versions of songs. The melody really needs to speak without lyrics. We slowed it down from the original, which made it groove a bit harder and heavier. It really has sections, and takes you so many places.”

In the final lap, Smith lost and recovered his drumsticks several times seamlessly. Building up to the climax, his sticks slipped away and he reached for more. However, they were not to his liking and he flung them in the air while looking for replacements. They smacked the roof panel back into place above him (which had been dangling out of alignment most of the evening).

His fluid motions are rewarded with deafening applause as a flash back to Smith's chat with Santana reappeared. “The language of the drum is grace to me,” described Santana. “Drummers can uplift you to a place where you believe anything is possible.”

"It's incredible that music can ignite something in humans at a molecular level,” Santana extended. “We arrange molecular structure by sound. Even non-musicians have a forgotten song inside them. It takes a musician with sound, resonance and vibration to unlock that person’s purpose.”

“Get the brain out of the way,” Chad agreed. “Exactly,” said Carlos. Smith pondered this for a bit. “You think God is a drummer?” he asked smiling. “Oh yeah,” Santana said with a twinkle in his eyes. “I know God is an incredible drummer man.”